Donations are not expected,
but always appreciated :-)
T Y I A!

We started early & didn’t stop ’til we ran out of trees!

We started handing out sugar maple seedlings at the Forest Preserve District of DuPage County’s 2018 Fall Festival about a 1/2 hour before the event opened. The trees were larger than last year, as they had had an extra year to grow. It was also was easier than expected to dig them up due to the heavy rains several days before which had softened the soil. Because of that, some of these trees had all their roots intact and some of these roots were 2-3 feet long! I think they should all do very well if planted right away and according to the Planting Directions.

Another 100 trees given away! 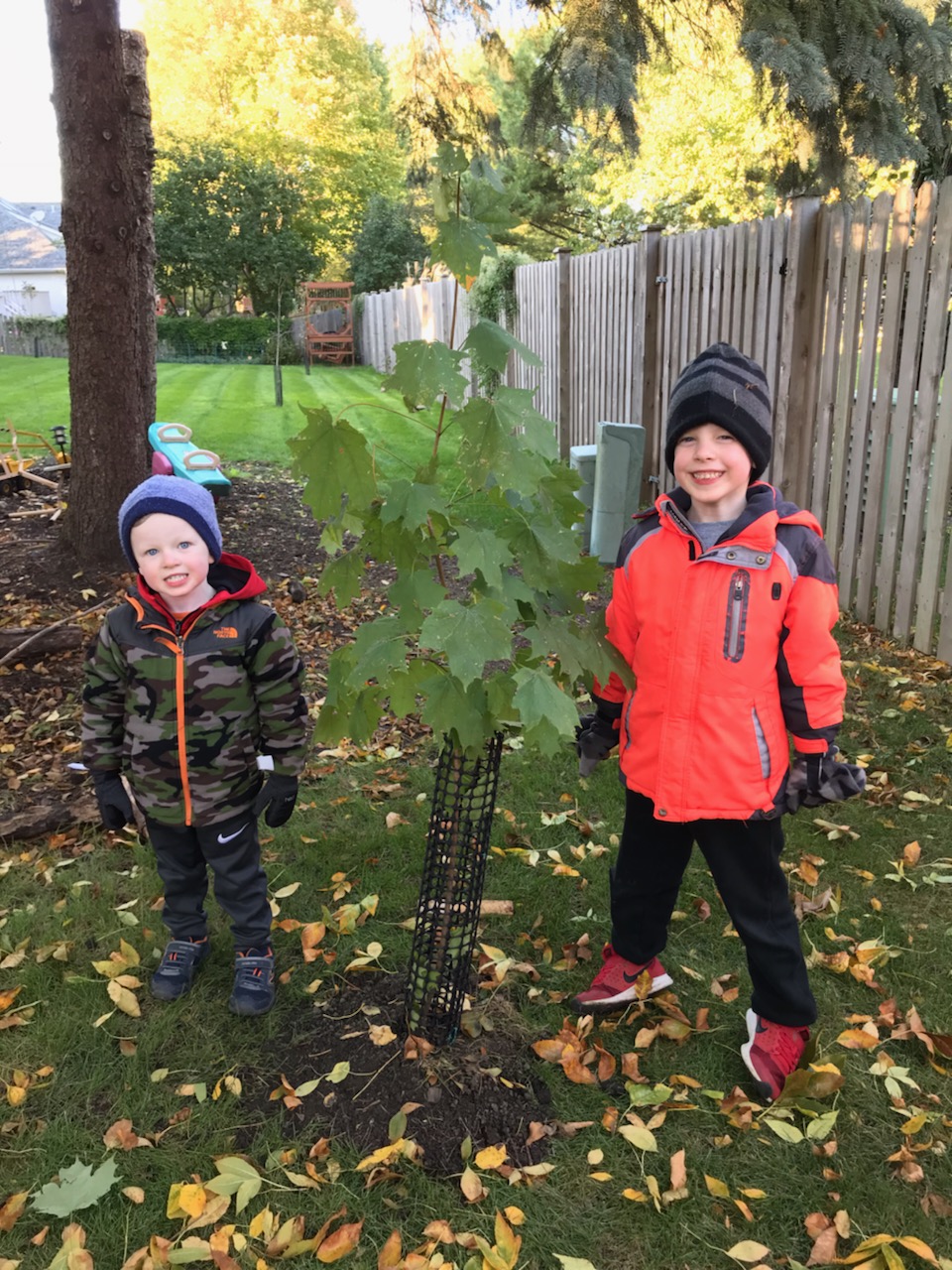 This photo came in the day after the event…

Looks like this family did a great job planting! 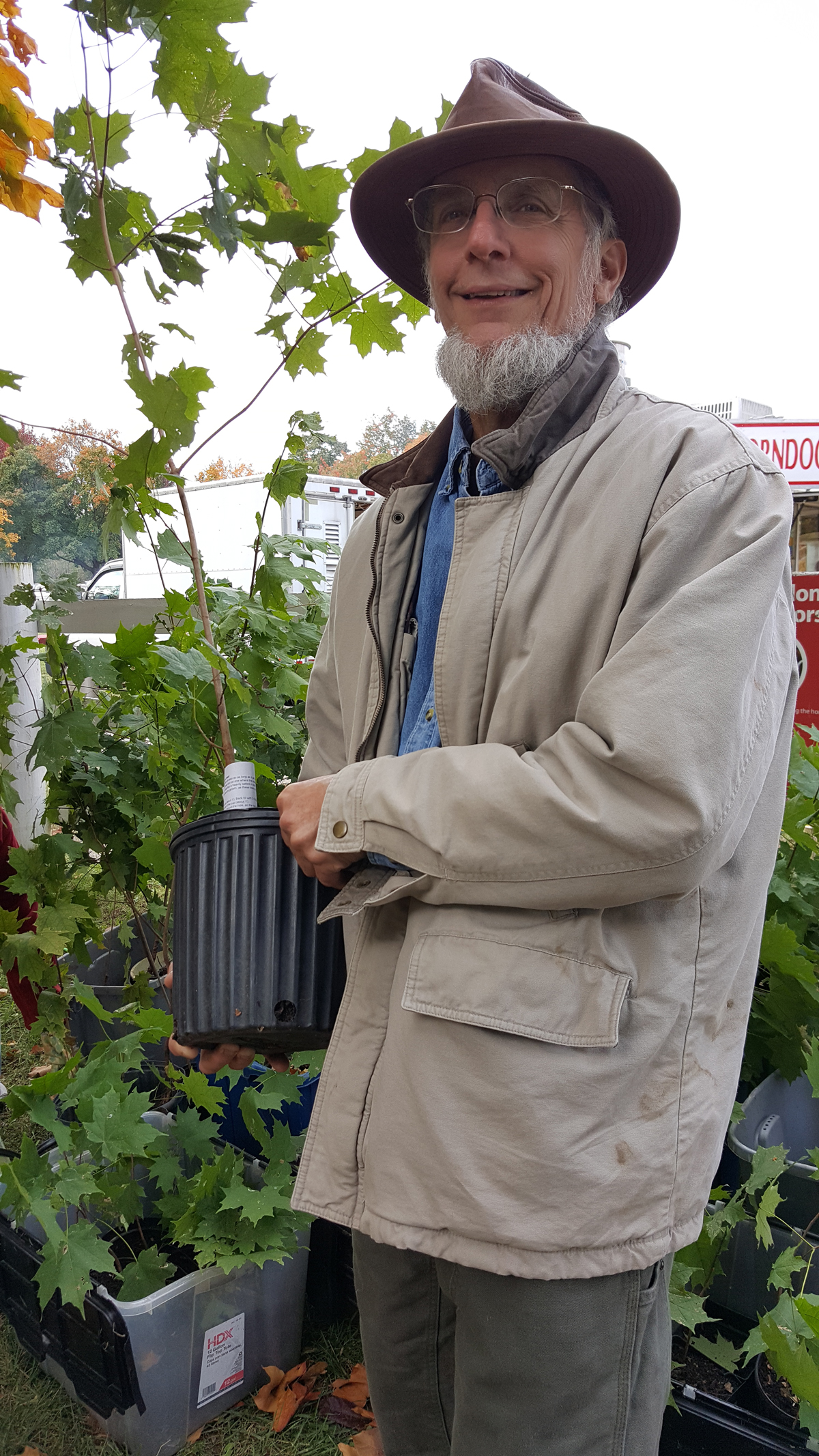 The happy gentleman below was our very first “taker” at this event. This is always a special moment for me because it shows that people really are going to take trees home and plant them so all our hard work has been worthwhile.

All in all, it was a wonderful crowd, just like last year. Many people stopped by our booth and told us about the tree that they got from us last year or even the year before.  Their trees were all doing well except for one, where the tree was run over by a mower.

We ran out of trees 2 hours before the event was over, so we could have found even more homes if we had more. I am encouraged that so many people are “getting it” about the value of trees and all the good that these magnificent living things do for us. Really, we can not live without them.

While it is hard to count so many trees over so many years, I believe it is safe to say that I have given away at least 8,000 to 10,000 sugar maple seedlings and about a dozen oak trees as well.

While it has been fun and rewarding and definitely worth it, it has also been a lot of hard work and a bit expense (pots, signage, booth setup, etc)! Since I have run out of seedlings, it is with bittersweet feelings that I call this project successfully completed and say good-bye. I will leave this blog up in case it encourages others to be brave and try to do something on a personal level to help the Earth and the life-forms we co-exist with, but it is time for me to turn the page and start a new adventure.

Bye everyone and please remember to send some photos of your planted seedling! It will make my day! (info@thesandymapleseedproject.com)

We had a really wonderful time again at the 2017 Fall Festival at the Forest Preserve District of DuPage County! Here’s the map showing the location of where people will be planting:

Click here to view an interactive version of the map.

Here are photos of some of the wonderful people who pledged to plant a tree: 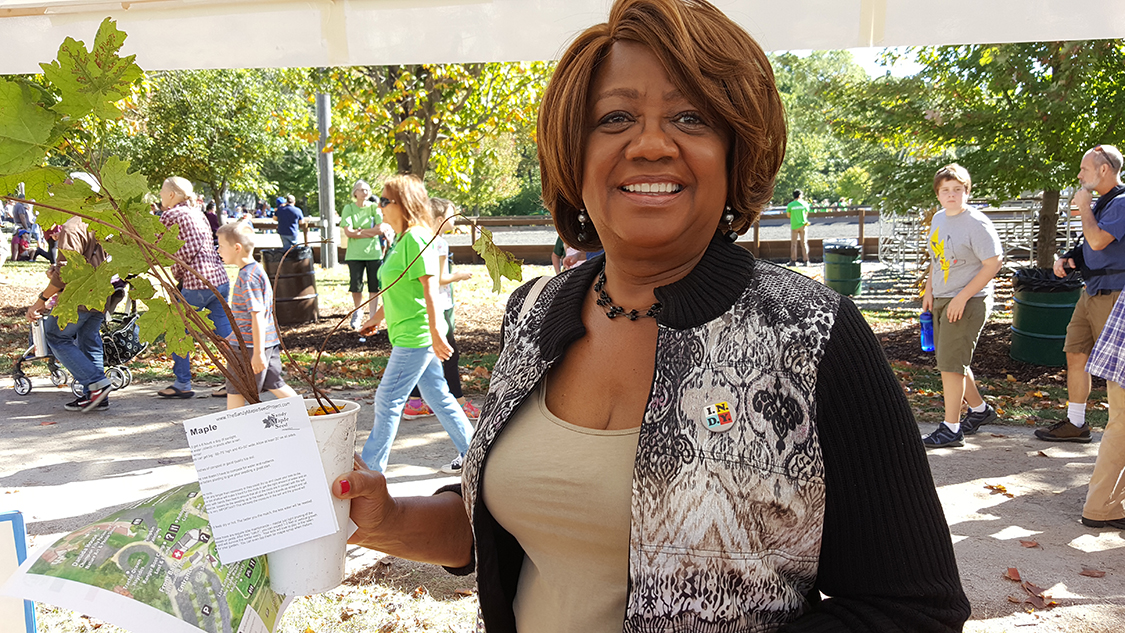 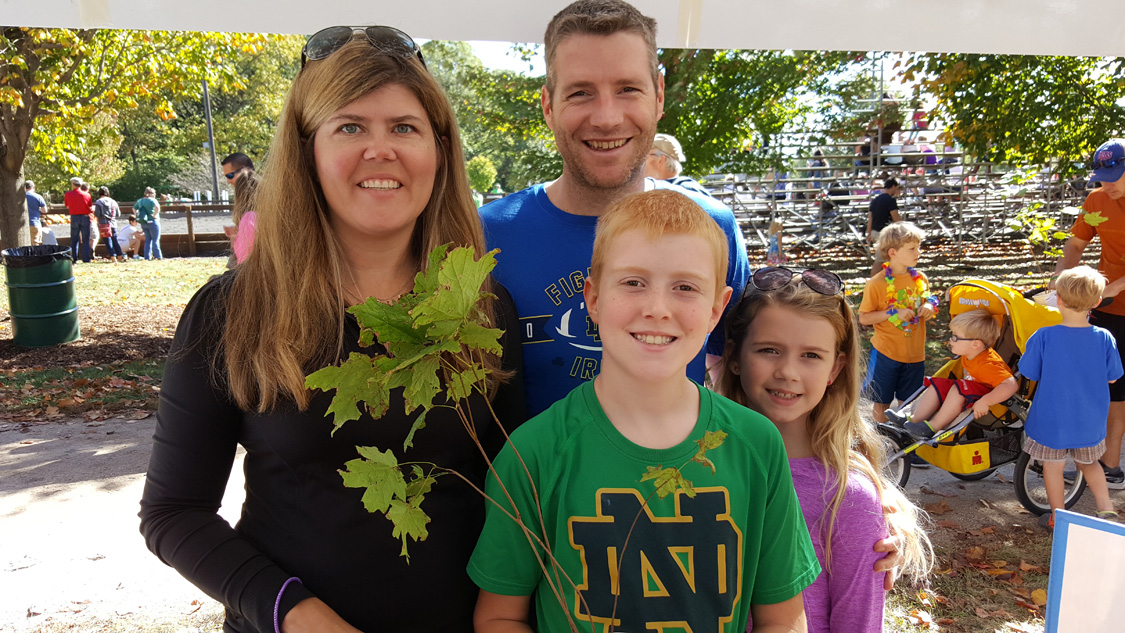 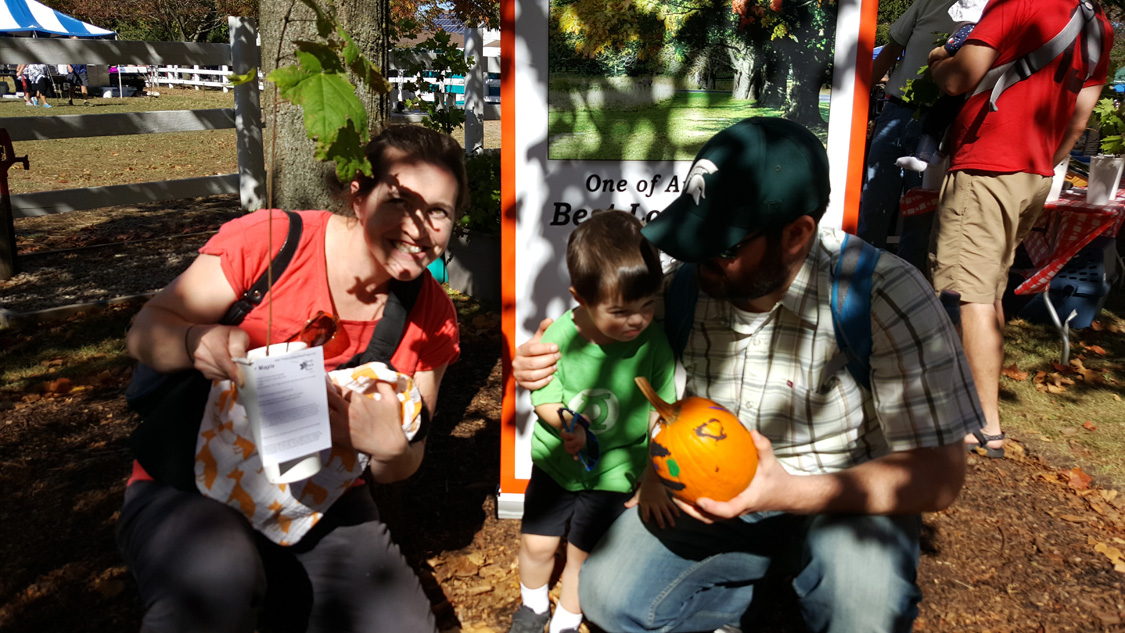 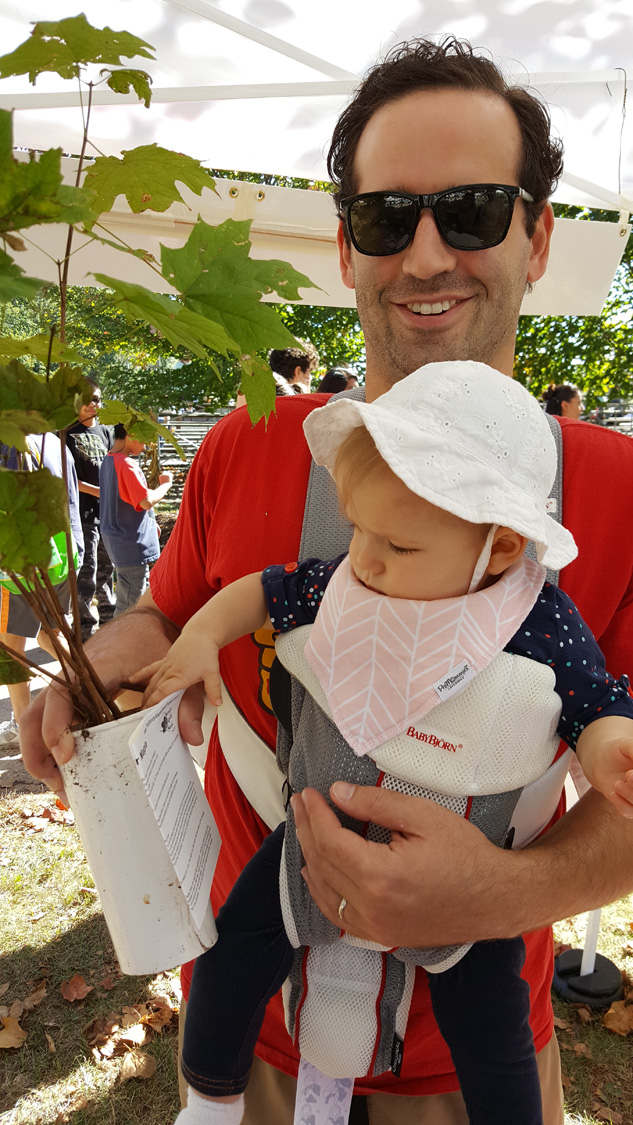 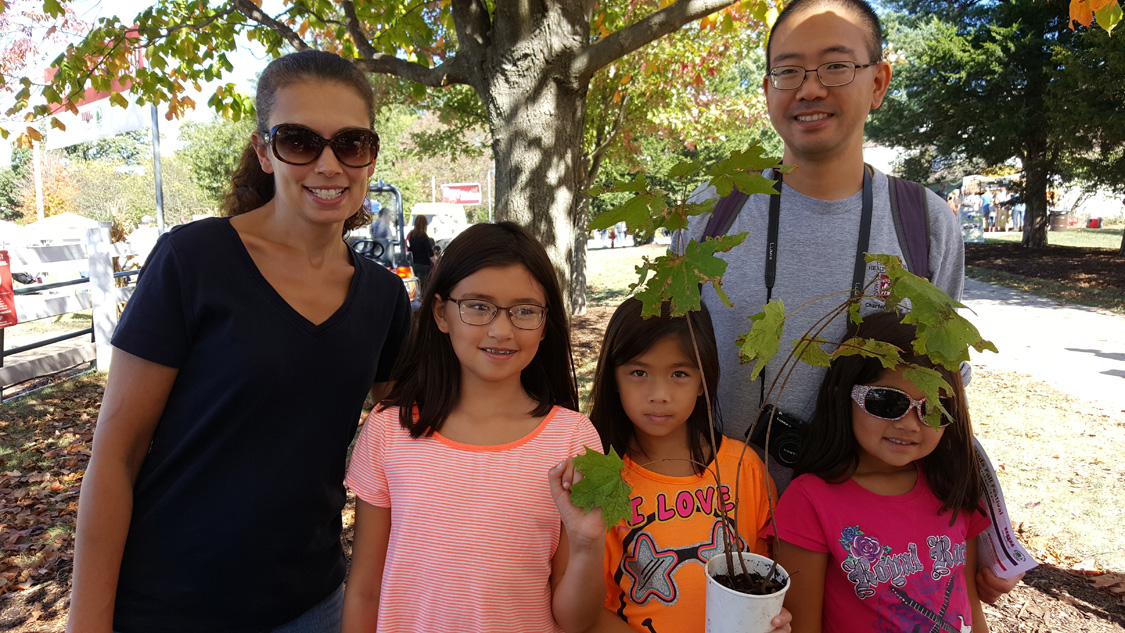 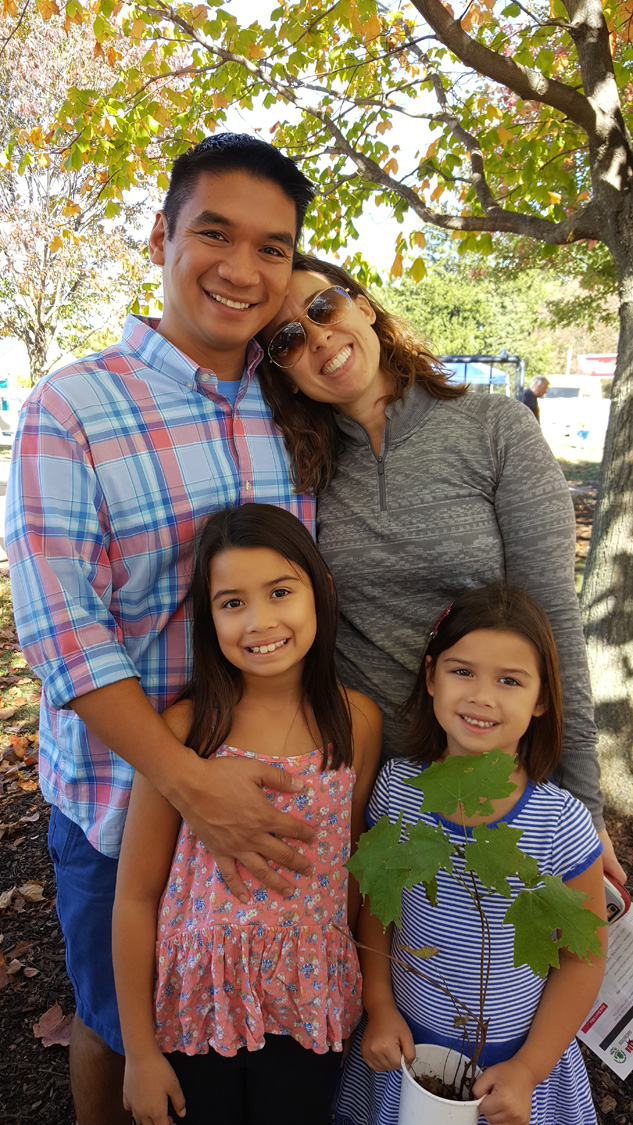 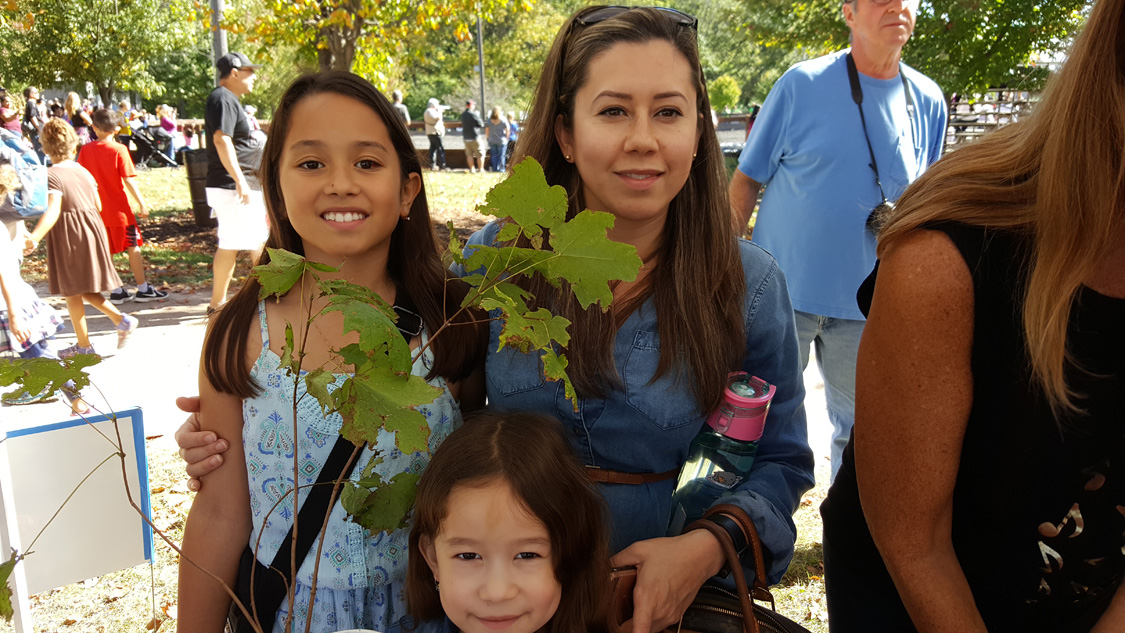 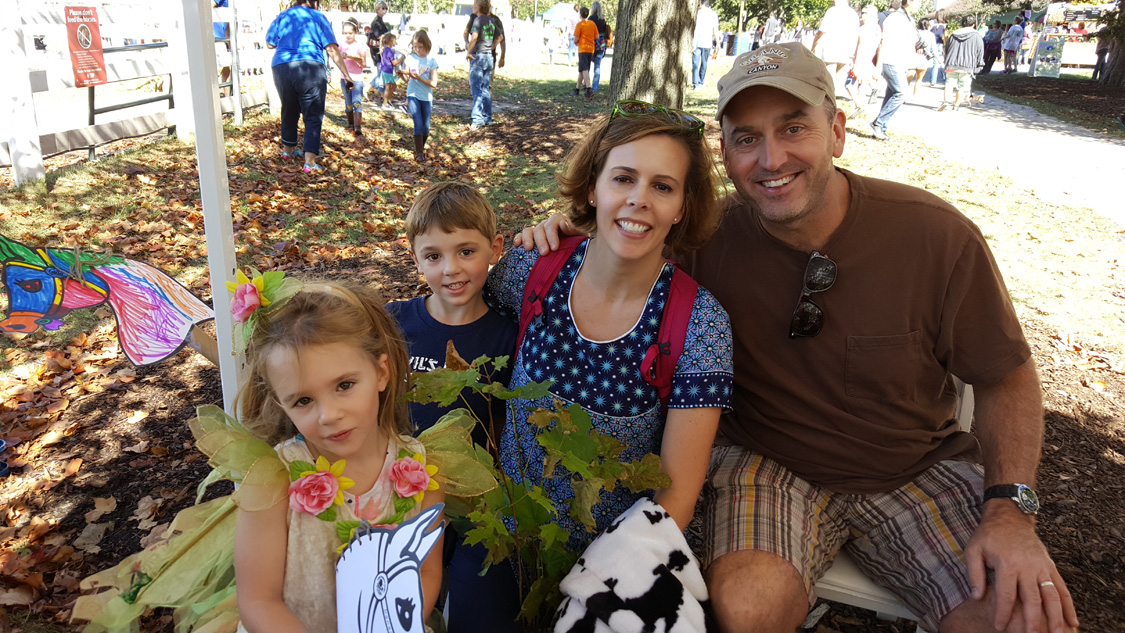 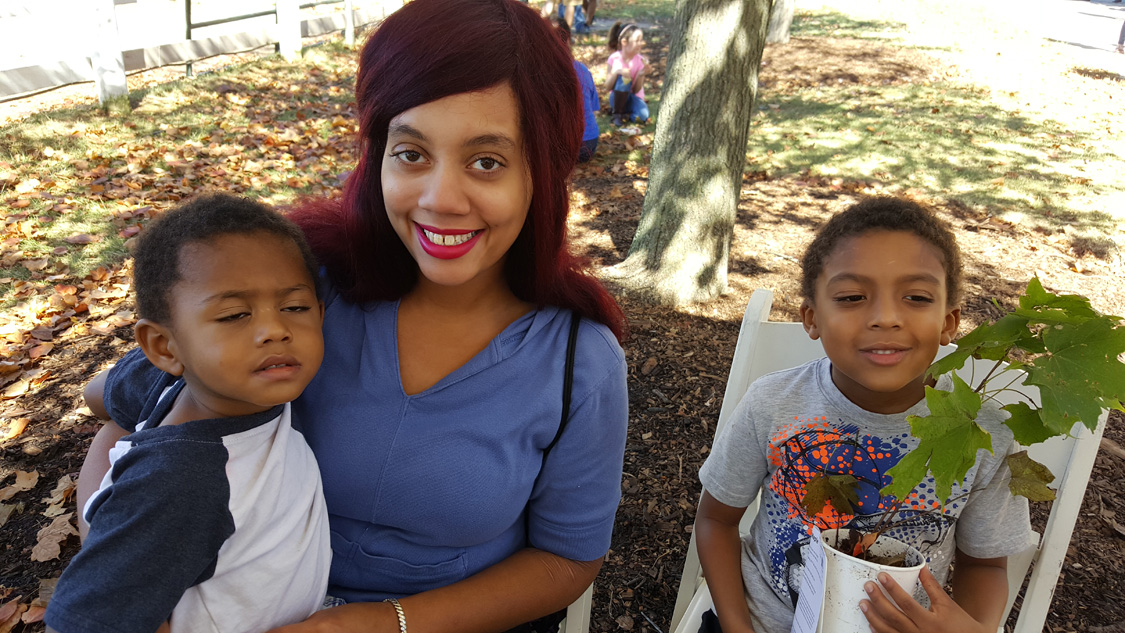 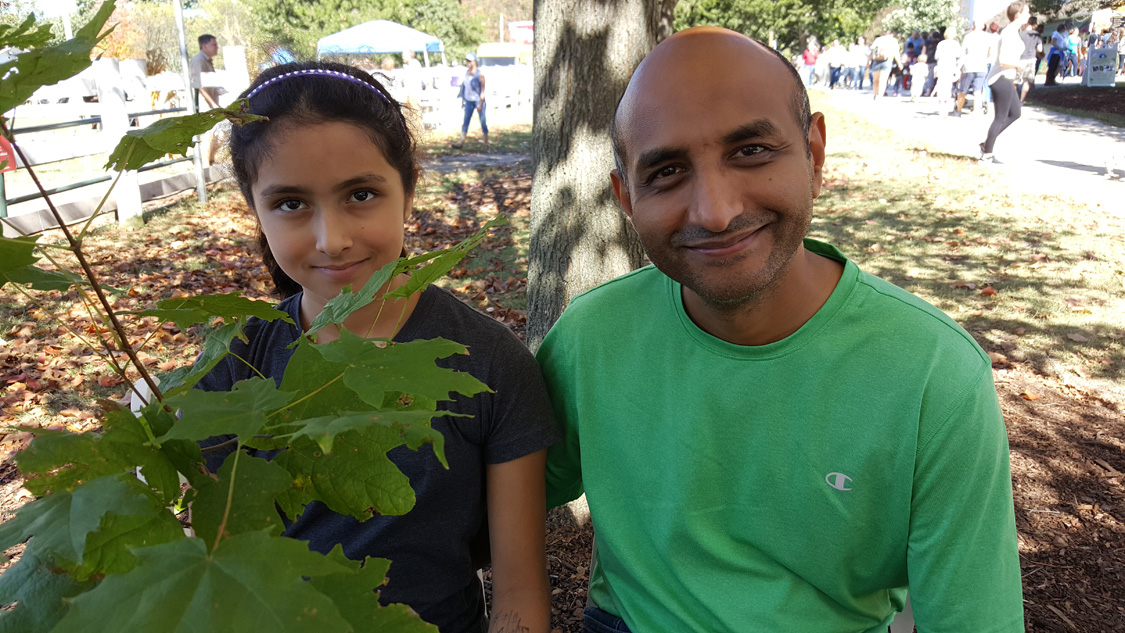 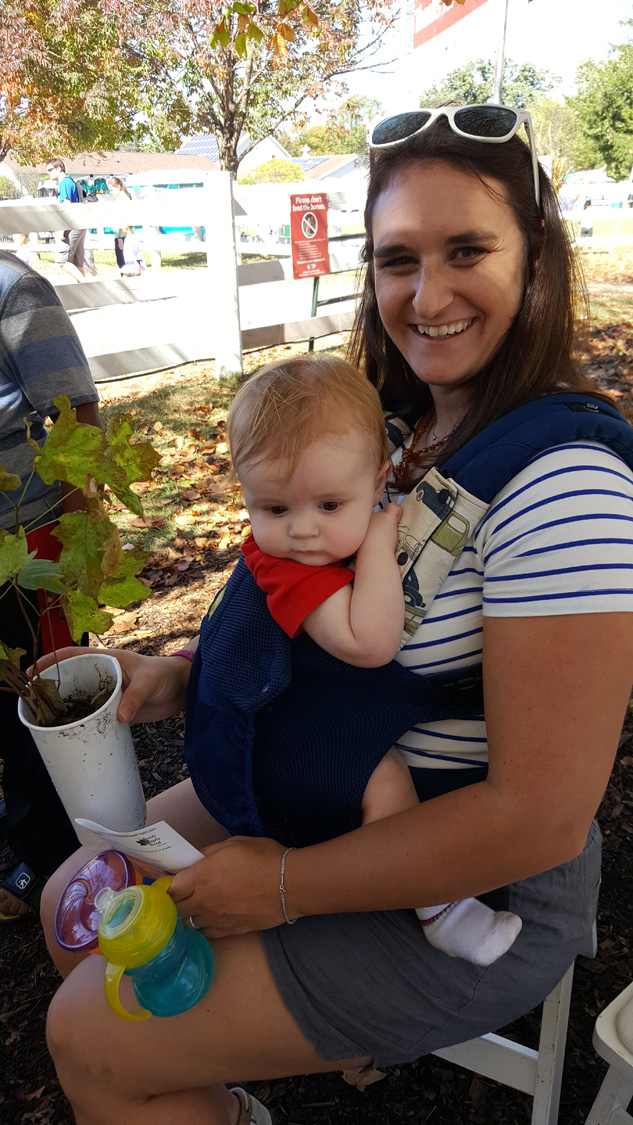 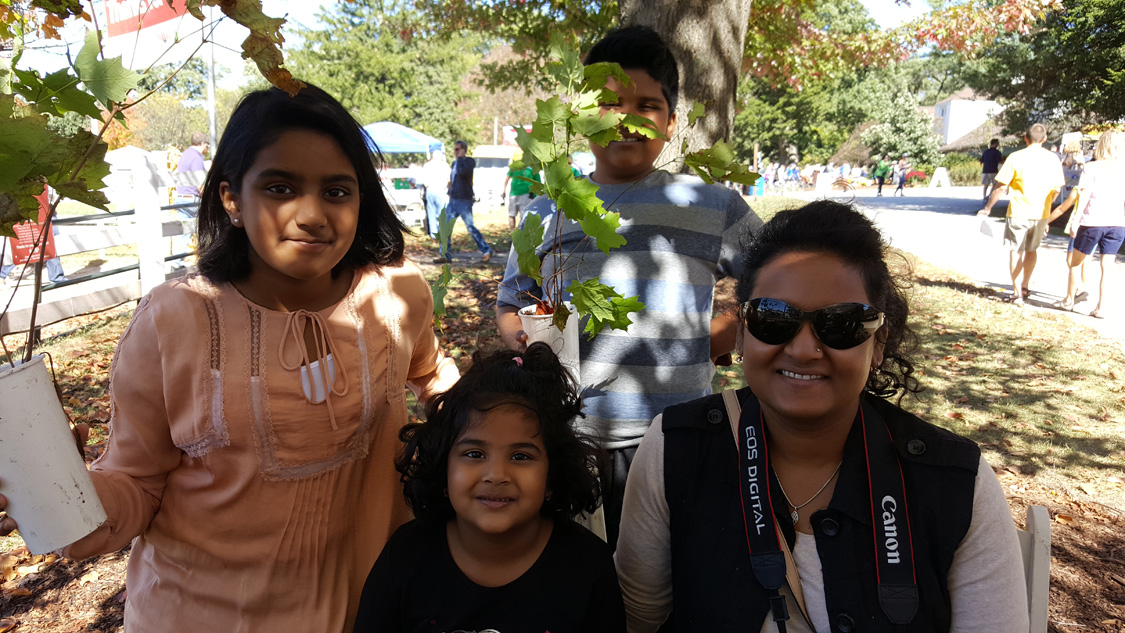 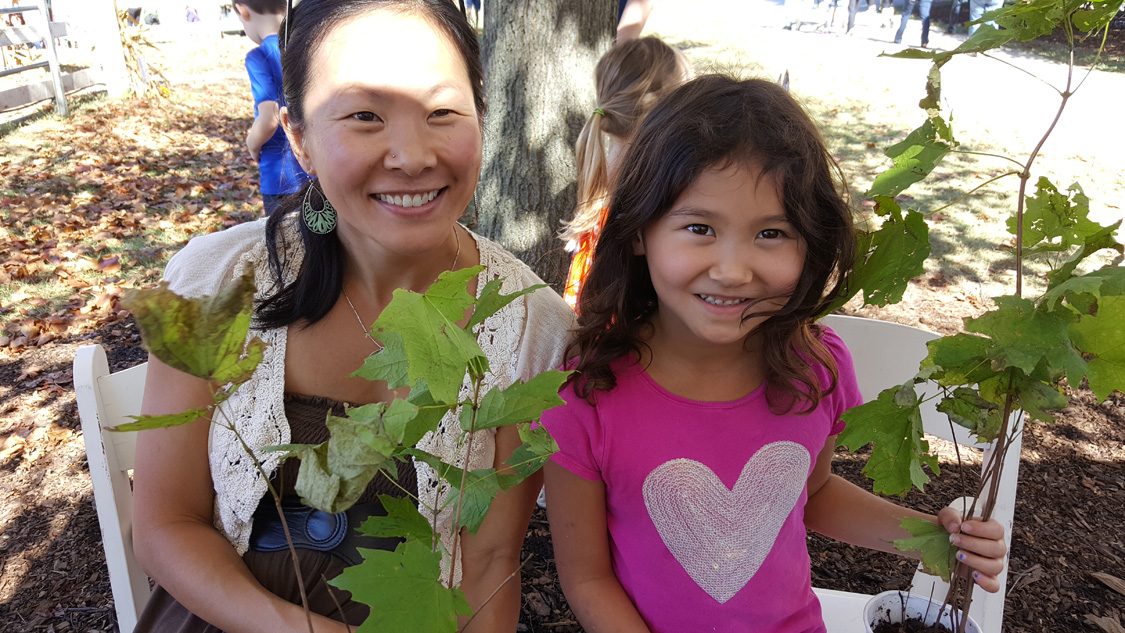 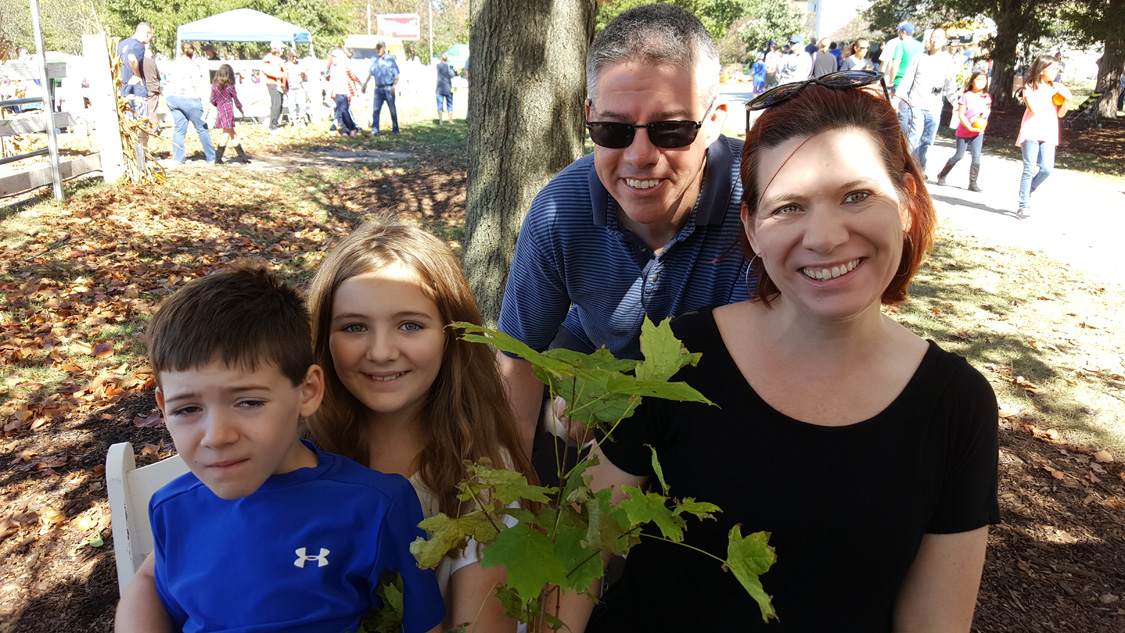 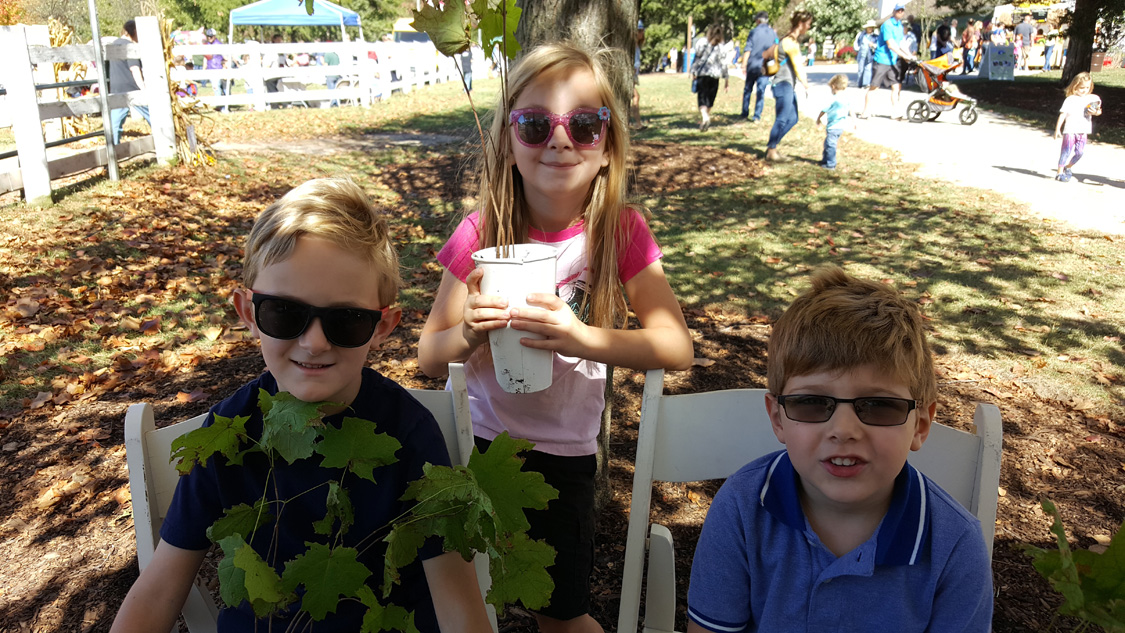 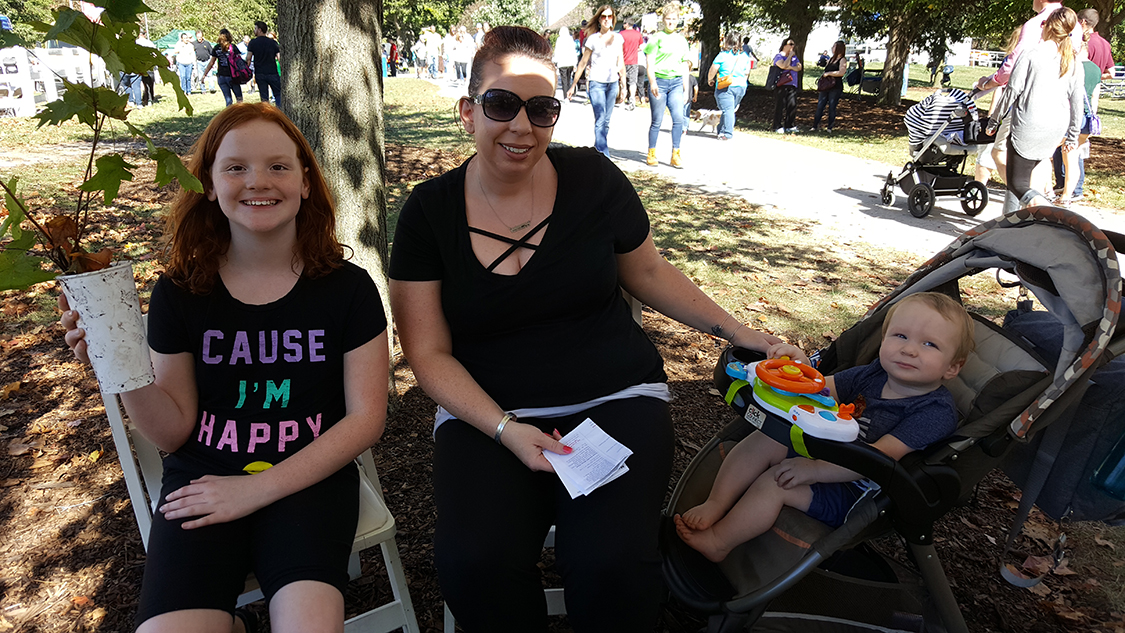 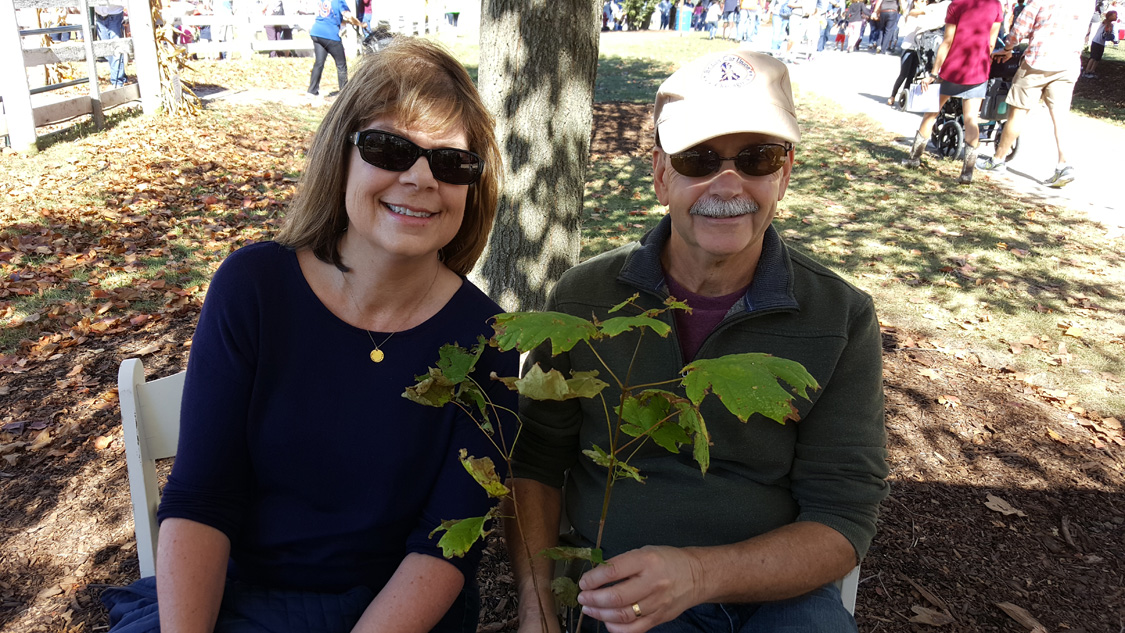 Here are some great photos and stories that people have sent in. They tell the story of the impact of the sugar maple seedlings better than I possibly could! Check back every so often, as I will add more photos at the end, as they come in.

First, I wanted to include this note from Phyllis B. because it really shows how good deeds can sometimes have a ripple affect!

There’s no doubt about it–Veggie Fest 2017 was a huge success! Tens of thousands attended this year — more than any other year. The food was delicious, the bands were fabulous, the speakers were great! Despite the large crowd, there seemed to be happiness, peace, and good will everywhere. I couldn’t help but think that this is the way America should be!

This year our booth was right next to the entrance, so we were swamped from the start. We ran out of trees on Saturday at about 5:00 pm. Then, Sunday morning, we potted up a whole bunch more trees which we ran out of those at about 1:00 pm. Throughout the day, we kept potting up more trees and bringing them over in batches, handing them out as fast as they arrived.

We finally ran out of paper cups, so we had to quit. But we still had people signing up to get an email about the next time we’re going to do this. Here are photos of just a few of them.

And here are some more of the wonderful people who will be planting trees:
Here’s a look at some of the places where the seedlings will be planted.

I want to thank everyone who stopped by and picked up a seedling and promised to plant it! I think there were were over 700 of you, roughly, making this the best give-away event EVER for me!

And a very special thanks to all my dear friends who pitched in so many times to make this possible. They did everything from digging and potting, to driving back and forth, to lending equipment and moral support, to shopping, setting up the booth and taking it down, scrubbing the bins, and even donating the booth. Here are just a few that I have photos of:

Thanks also to Steve Tiwald of the Green Earth Institute for lending much needed bins as well as moral support and encouragement.

And last but by no means least, thanks go out to the Veggie Fest people for donating the booth again this year so that we could reach so many people! The Veggie Fest staff was incredibly nice! They helped us move stuff in a golf cart before and after the event. They brought us buckets full of water which we didn’t even ask for–they were very thoughtful and always there when we needed something!

Here is a cool map that shows all the people who registered and got a free sugar maple tree at VeggieFest 2017 on August 12 & 13 at Illinois Benedictine University.

To find your dot,  CLICK HERE or on the map to see the full-size interactive version of this map that you can scroll and zoom. To find your own dot, scroll over and zoom into your general area, then click on any dot to see the details.

Please note: the image above is just a small portion of the entire map, so click above to see the full interactive version.

Hi! If you came to VeggieFest 2017 and got a free sugar maple tree (or 2 or even 3), please remember to plant it as soon as possible according to the directions we handed out (which are also on this website), then send a photo of it to:

Thank you so much for doing your part to plant a tree, clean the air, and cool the earth.

If you did not get your free tree yet, or you’d like another, check back here soon as we will be posting info on our next two Give-Away events soon. One will be in Sept and the other in Oct, 2017.

Although we ran out of trees to give-away at Veggie Fest, we will have more soon! Here are our next give-away events:

Look for us along the parkway.

Hope to see you there! Stop by our booth # G3 and get a free tree or just say hi! Tell your friends, too. If you got a free maple seedling from one of the new a “Yard Displays” or “Road-Side Self-Service Stands,” you may not have registered online yet. But don’t worry, registering is quick and easy.

Registration is important because it tracks where the seedlings are being planted and encourages others to join us.

When you register,  you get a chance to “put your dot on the map” and dedicate your little tree to someone or something special to you!

So please, click here and register, if you haven’t done so yet! It only takes a few seconds and it will really help a lot!